Note: This is the third entry in a series of posts about writing my first iOS app. The app is currently in review, and until it is rejected or approved, I plan to write something every day about what I’ve learned.

Today I’m going to talk about Glances. On the Apple Watch, Glances are what you see when you are looking at your chosen watch face and swipe up from the bottom of the screen. According to the official Apple Watch Programming Guide:

A glance is a supplemental way for the user to view important information from your app. Not all apps need a glance. A glance provides immediately relevant information in a timely manner.

Since my app’s primary function is to display a randomly selected Bible verse, I was originally hoping that my Glance could do the same thing. Unfortunately, I hit a snag: Glances must be completely static. That means no buttons, and no scrolling. If the selected verse was too long to be displayed on one screen, it would simply be cut off.

Many of the developers I follow on Twitter have remarked that for them, Glances are almost like the Dock on OS X: they provide a quick way to launch a frequently-used app without having to go to the App Screen (or whatever it’s officially called). Because of this, I decided that my Glance should have two characteristics: 1) be visually attractive and 2) display only the reference for the randomly selected verse. Tapping the Glance would then launch the app and display the full text of that verse.

My favorite Glances on my Watch are those that are colorful. The Dark Sky app uses yellow text to indicate how many hours of sunlight are left, or blue bars to indicate rain. The WWDC Glance uses the app’s purple tint color to show the next upcoming event. The heart rate Glance, as expected, is red. Since my app’s primary colors are orange and blue, and the name of the app is “Refining Fire” (more on that tomorrow), I decided to use those two colors along with a simplified logo to differentiate my Glance from others. 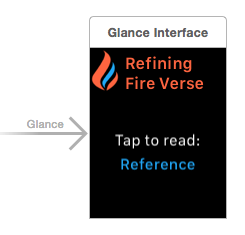 The next thing I had to figure out was how to pass information from the Glance (in this case, the verse reference) to the app. Turns out, it’s super easy to do. In the willActivate() method of my GlanceController, I called updateUserActivity() and passed in the verse reference as the userInfo. The userInfo needs to be a dictionary, so it looked like this: userInfo: ["verse": verse.reference]. Maybe for your app, that userInfo is some kind of UUID for looking up the object that you need.

Next, you have to implement handleUserActivity(userInfo: [NSObject : AnyObject]?) in your initial view controller for your watch app. For my app, I used this method to fetch the verse object that matched the given reference. From this method, you can push any controller that you want using pushControllerWithName. Note that the “name” parameter should be an identifier for the view controller that you can set under Attributes in Interface Builder and the “context” parameter should be whatever information you need to pass to the next view controller. In my case, it was the verse object that I fetched.

The final step was to go to the view controller that would be displaying the verse and update the awakeWithContext(context:) method. Here, I did a simple test for nil: if “context” had something in it (in other words, if the user arrived at that screen by tapping the Glance), the app would use that as its data source. Otherwise, it would fetch a new random verse as usual and display that. Piece of cake!

As a final note: I have no idea whether it’s okay for me to be talking in so much detail about an app that hasn’t been approved and may never be approved. If it’s rejected, that’s fine… I’ll discuss my reaction to it and whether or not I’ll resubmit. :-)